Read all the news about our company

What is biochar and how does it help?

What is biochar and how does it help? Simply put, biochar is a highly adsorbent, specially-produced charcoal. It was originally used as a soil amendment. Scientists theorize biochar was first used in the Amazon Basin thousands of years ago.  In this area, there are extensive regions of dark, highly fertile soil known as terra preta were discovered, revealing high concentrations of biochar and organic matter.

While the Brazilian tradition provides long-term evidence of biochar’s positive impact on soils, recent research continues to support the concept. Examples include naturally-occurring biochar found in fire-prone North American grassland soils. Sharing the same basic properties with biochar generated from wood and grass feedstock, these grassland soils prove to be some of the most fertile in the world.

What is biochar and how does it help? Biochar is similar to charcoal being produced using the ancient practice of heating wood or other plant material (biomass) with little to no oxygen. However, unlike charcoal, which is often used for cooking, biochar is made under specific conditions.

The intent is for it to be applied to soil as a means to increase soil fertility and agricultural yields, and sequester carbon to reverse global warming. Other market uses of biochar are being discovered regularly as universities conduct extensive research into this versatile material and its cation exchange properties.

Biochar is thought to be the key component in a carbon-negative strategy to resolve several critical current ecological and energy challenges.

Biochar is produced by pyrolysis, a process in which biomass is heated in an oxygen-deprived environment to break down into simpler substances. There are two types of pyrolysis: fast and slow.

Fast pyrolysis uses moderate to high temperatures and rapid heating of wood chips while slow pyrolysis is characterized by gradual heating over a wide range of temperatures to produces its biochar.

In addition to sustainably producing food, biochar is now seen as a simple, relatively low-cost tool for mitigating climate change. The production and use of biochar in soils create a long-term carbon-negative cycle by sequestering atmospheric carbon over long periods of time and reducing nitrous oxide and methane emissions from soil. 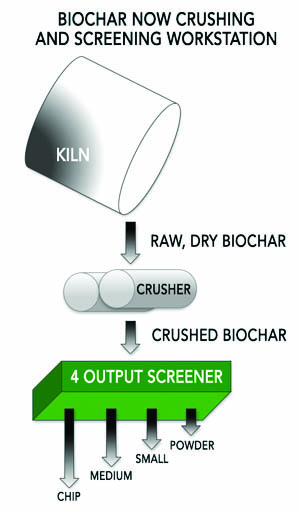 Biochar is referred to as “carbon-negative” because it has the potential to sequester more carbon than is produced. During pyrolysis, approximately 50% of the biomass’ carbon content is held by the biochar, compared to 10-20% that remains in biomass after 5-10 years of natural decomposition.

What is biochar and how does it help? Here are some resources for you to learn more.

Find our more with this link to our